I've been away for a long time. When I started this blog, I was scared and excited! Excited about our journey and scared if I'm doing things the right way. The blog world helped me connect with a lot of parents from around the world, gain valuable information and just stay connected and share our wonderful as well as challenging experiences. I even met a few parents from India, spoke to some over phone and connected to others via social media. This space had helped me immensely.

Now, I'm back again. This time there is more of the 'fear' factor.

Vignesh turned 6 last month. I've been able to connect with a lot of families with down syndrome and also attended a few seminars and workshops. But, I could not identify with other families in terms of behavioral traits and so many other things. Even when I went to the workshop a couple of years back, I felt completely lost. This seminar was organized by Down Syndrome Research Foundation (UK) and when they were discussing about various studies and findings and common traits, I felt out of place. I found his behavioural pattern and interactions completely different from what was described or what I saw in other kids. I discussed with his therapists, but they felt I was worried over nothing. I thought it might be due to his tracheostomy.

We moved to a different city last year. Since then, there were 3 people - a developmental pediatrician, a psychologist (his school principal) and a therapist felt he is on the autistic spectrum. But, all three of them also said it could also be because of a lack of communication due to his tracheostomy. I later attended a workshop for the parents of kids on the autistic spectrum on the advice of the developmental pediatrician. This is where I felt like a complete fit. I could identify with all the behavioral traits that each parent was describing.

I guess even then I was attributing things to his tracheostomy. But, now I had again started reading blogs and was researching on ways to get over the behavioral issues that Vignesh has. This is when it finally dawned on me that he is on the spectrum.

I don't know why! I feel so scared. Why did it take me so many months to accept that he is on the spectrum is beyond me. When Vignesh's karyotype report came in for Down Syndrome, I shed a few tears and within minutes I was fine. I was only concerned with his health issues all the while.

I think I'm rather growing old or is it because I feel I have missed out on important interventions for autism for so long? I'm also having a hard time convincing the therapists here that Vignesh is on the spectrum. I have tried two therapists here. They are rather classifying him as extremely delayed rather than a dual diagnosis. I have tried telling them that he understands so many things but has problem expressing things in a social setup. But, they don't take my word for it. They are just concentrating on the Down Syndrome part and that scares me.

Vignesh's admission has been rejected by so many schools here. Finally, one of the special schools have accepted to give him a trial run for about 6 months. They find it difficult to have him for the entire day and they have accepted for 1.5 hours every day.

I guess it's the fear of not doing enough for him. I also keep reading that there is very little information so far on dual diagnosis. I'm not sure where I'm going to start. But, I understand there is so much more to be done.

I want to start the journal again. To learn, to share experiences, to connect with other families who are in the same place and not feel lonely. And, sometimes just to vent!

I hope I gain more confidence in myself and do everything that I can to help my son in his journey!
Posted by Sumithra at 1:53 AM 3 comments:

Vignesh has a little brother now :) Ramesh & I are happy to introduce our new born, Pranav. He was born on the 4th of this month. 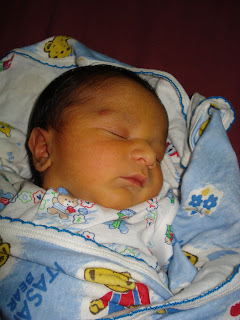 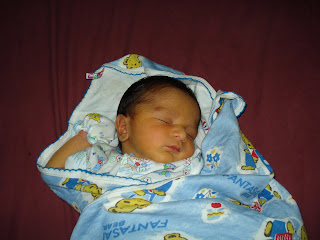 Pranav with my sister 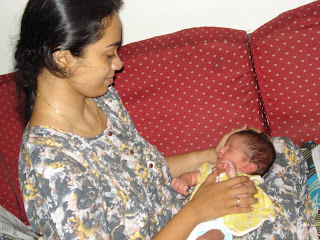 I can't wait to take a family picture especially with Vignesh & Pranav together. But, looks like Vignesh needs a little more time getting adjusted to the little one. :)
Posted by Sumithra at 9:22 PM 6 comments:

Today was Vignesh's first day in school. I'm taking him to the day care a couple of hours in the evenings, so that he gets accustomed to the place first. Once, he is used to the place, we'd be moving him to playgroups. I'm very happy with the school and the people there. Although, they have not had dealt with kids having tracheostomy or down syndrome, they are willing to give a try and see how things work. Its a nice place and I'd love to see Vignesh settle there and make friends.

The session started with rhymes and Vignesh enjoyed it. But, once the other activities began, he totally lost interest and got into a 'throwing spree'. We tried various games, but he was only vigorously throwing everything away! He was also trying to roam around on his own and stay away from other kids. I think he was probably shy and the throwing was his way of expressing it. Especially, when I saw that the other kids were so organized, I couldn't help but compare and panic. I know I'm being unfair and it was his first day and all. But, I think just like Vignesh, I too felt lost. Thankfully, the school director is a very understanding person and she made me see I was being unfair.

I'm just waiting to see how Vignesh is going to do tomorrow. I'll need to discuss with his OT about this too. I'd love to have suggestion or advice from other parents.

I'm too tired and sleepy. It well past midnight here. Today, being a special day, I just wanted to make sure I keep a record of this day. Before I log off, here are a few pics from Vignesh's first hair-cut: 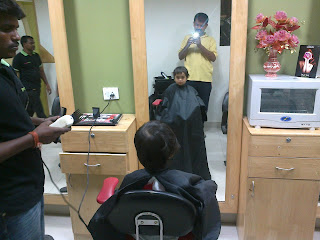 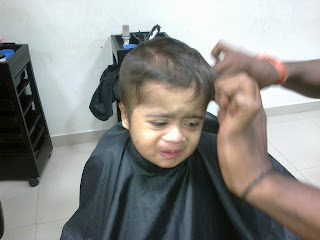 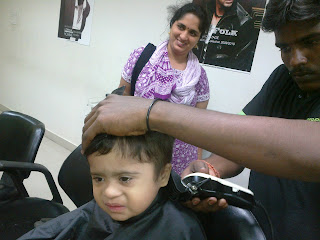 This past month has been amazing!

Vignesh started to pull up and stand without support and could now stand on his own for about 5 minutes. 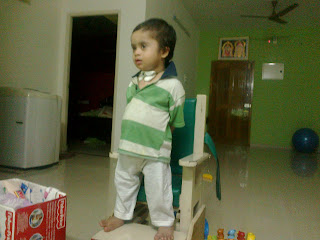 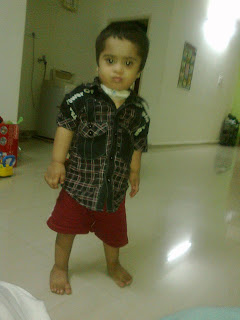 He also took his first step without support (now, he just takes a step or two on his own)

He has begun to climb up and down sofas and beds. He has now started climbing chairs and staircase. 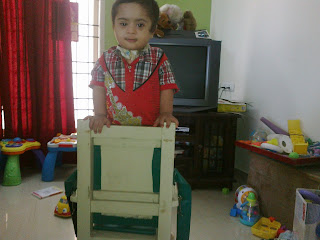 He has also started to hide and make his mama run around the house searching for him. 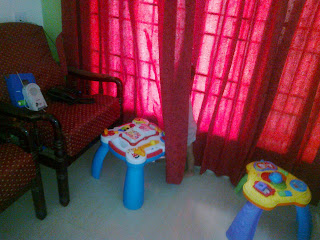 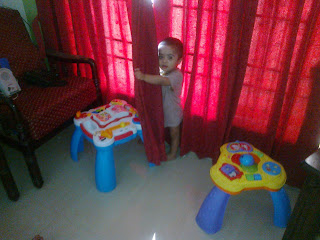 And, last week he wanted me to play his rhymes dvd. When I din't, he took 2 DVDs and see how he tried to play it on the television! lol! 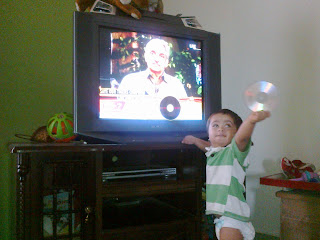 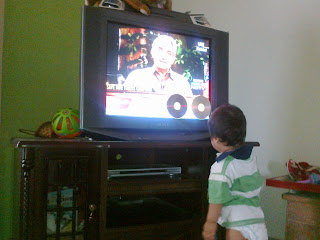 In the beginning of the year, Vignesh began to pull himself to stand, crawl, cruise and walk with support. But, for many months after, he did not achieve any new milestone and it was making me worried! Now, the end of the year is rocking again! I'm so proud of Vignesh. 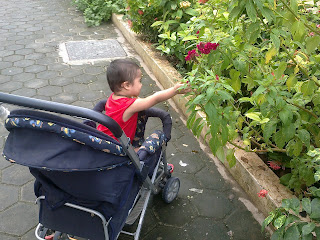 Here is a video of Vignesh signing. Vignesh & I love this video.

We had Vignesh II year photography done about a week back. We just had a small celebration for Vignesh's 2nd birthday on July 15th . Din't want to miss on taking his portraits though. We had to hurry up with it. (You will you why when you scroll down to the last pic on this post.)

Here are the pics from the photoshoot 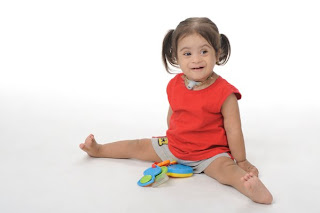 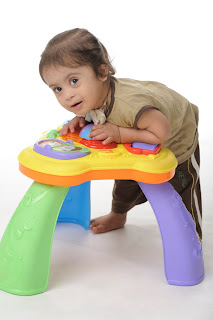 Performing for his favorite rhyme 'Listen to the music' 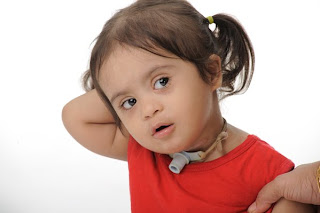 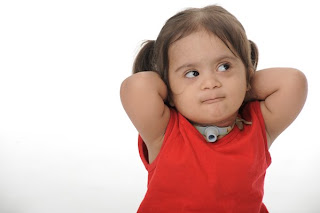 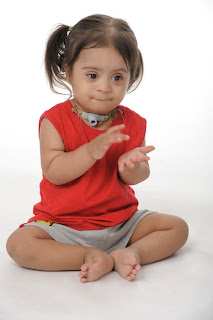 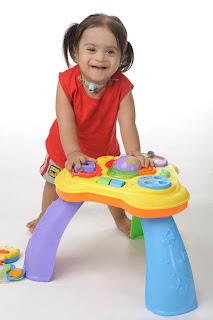 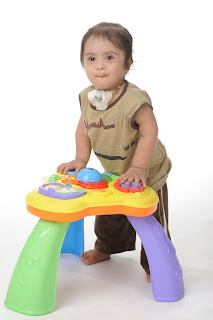 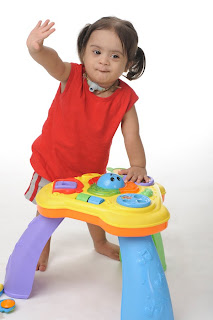 Here is a photo of Vignesh in a different hairdo 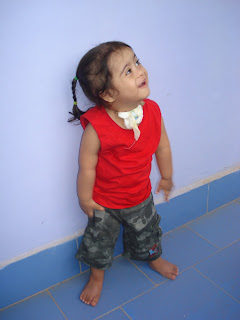 And, this is the reason we had to hurry up with his photoshoot. 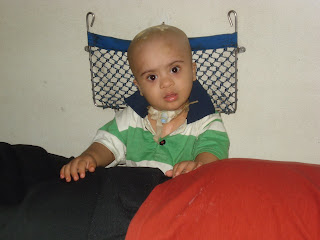 This is a part of our custom. They generally shave a baby's hair once or twice between one to five years. 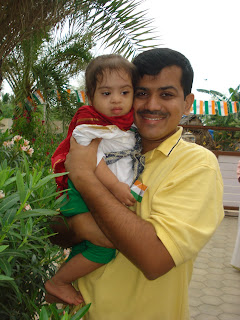 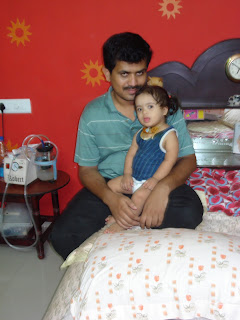 Vignesh had his airway surgery on the 22nd of last month. Doc wants to try decannulation after 4-6 weeks. Vignesh is doing fine and keeping me busy with his antics.
Posted by Sumithra at 2:03 PM 5 comments:

Here is a list of some of the amazing blogs that I love to read. Divided them into various categories just for the ease of reading.